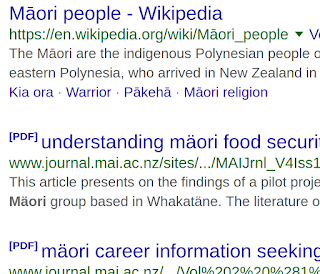 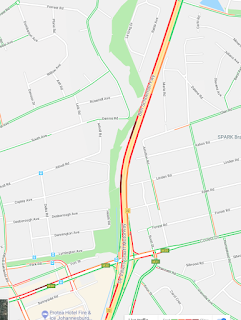 Given how much time many of us spend in traffic, it is surprising top me that we do not discuss it more. Although slightly off-topic for this blog, I would like to suggest some important characteristics of freeway traffic to keep in mind. How traffic actually works by Jason Liszka ("A Gentleman and a Scala") provided some of the inspirations and images are used here without permission but under the presumption that it constitutes fair use under South African copyright law.

Google Map's traffic layer shows, on the right, the area around the Corlett Drive exit on Johannesburg's M1 which might really still be called the Sir De Villiers Graaff Motorway as here on Google, at around 16:45 this afternoon. Traffic coming in from Sandton and Pretoria (from the top) flows nicely (we drive on the left, remember) until about a kilometre or so before the ext and then again after it. I know this area and although it is possible there was an accident, I think this is usually simply traffic caused by the exit itself even though the map does not yet appear to show exit traffic backing up onto the freeway a bit, which often happens here and even more so at Grayston Drive, just off the picture at the top.

Obviously, an easy solution is to widen the road area of the exit so as to simply provide more parking space at the robot so that cars do not need to quasi-park on the freeway. Closing the exit during peak hours might also help if nearby exits are able to handle the additional traffic. Experimenting might not be all that difficult! To see that this might not really be harmful, consider the following graphs from a recent study Freeway Speed-Flow-Concentration Relationships: More Evidence and Interpretations (with Discussion and Closure) by James H Banks in San Diego. 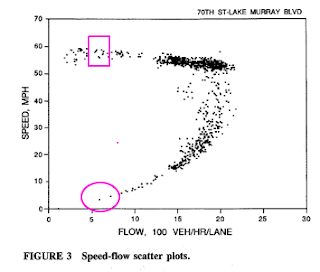 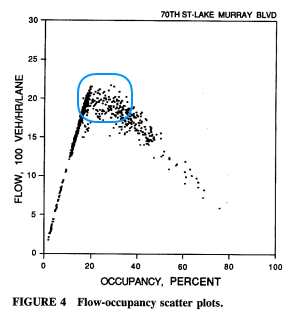 The areas outlined (by me) in pink in Figure 3, show observations having the same flow per hour of vehicles for a section of the freeway but demonstrate that this low flow can be achieved in two different ways – by cars moving quite fast (and at lower density) and by cars moving at an absolute crawl (but higher density on the road). The outcomes of the two situations are exactly the same in terms of the number of cars and people able to travel from A to B in an hour. This is the catastrophic transition from free-flow to congested traffic which everyone should be very eager to avoid.

Figure 4 in the article (on the left) is a slightly different view of the same phenomenon. In the area outlined (by me) in blue, we have near maximal flow with modest occupancy (the amount of road space occupied by cars). Observer how quickly the free-flow situation deteriorates after reaching its peak at around 20% which simply means that everyone has room for 4 cars between themselves and the next driver. Any higher occupancy than that reduces the flow, i.e. the aggregate outcome for everyone.

What is the solution or take-away conclusion? Basically, a freeway is of greatest utility when the following distance is four cars. Would some people pay to move closer to this optimal usage? Surely. Do we know quite how to make it happen? Possibly, not yet. 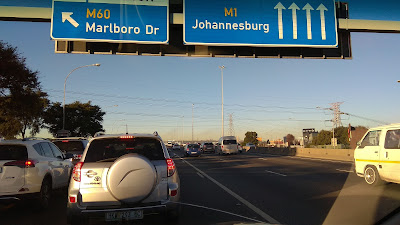 It took me a really long while and many attempts to work out that the required answer, to continue, was J or j or Ja. Computers are from Venus... ;-)

More unexpected website/app/software behaviour, this time from Amazon. Somehow it is impossible to change the payment method for this subscription, occasionally reported as unavailable for me, yet regularly being charged. On the other hand, elsewhere the subscription rate is reported to be "$undefined / Month". I suspect the issue arose through me subscribing with a different "home" address than the one I currently use and that it might be impossible to start a subscription in my current delivery location. On the other hand, they appear to be charging the VAT for my current location at the correct rate (which changed a few weeks ago)...