Digital convergence - the Empires strike back

Summary: Digital convergence means that services and content have broken the connection with physical infrastructure. If you ever got on the plane in Jo'burg, landed in Kuala Lumpur and used Google on your cellphone to find the address of your hotel on the Internet, you'll know what I mean. However, mighty companies and government are massing their forces to contain this technological revelution...

With great displeasure but no big surprise, I have just read an unconfirmed report in a forum about Telkom's plans to throttle Skype traffic on the South African ADSL network. One can safely assume the intention to be to protect their lousy and expensive "plain old telephony service" (POTS) also known as "landline voice". Especially so since people are now using SkypeOut even to call local numbers in SA.

Telkom is not the only player to have reacted to the phenomenon of digital convergence by jumping out of bed with guns blazing. Cellphone networks MTN and Vodacom have indicated that they might control or apply surcharges to VOIP traffic on their mobile data networks. Never at the back of the line when the buffet is open, the Independent Communications Authority of SA (Icasa) is looking into requiring television licenses for cellphones if they can be used to receive TV signals. Another long-standing fan of social control, the government of Germany, is actually implementing such licences from January - and not only for cellphones, but also for computers - to the tune of €5,52 (approximately R50,00 which is actually considered a discount in Germany, being closer to the radio fee!) per month since these can be used to access television over the Internet. Just imagine paying R600,00 per year in television license fees each for your laptop, your desktop and your spare server!

Why are they all doing it? Well, business - but the business is protecting the returns on their license rights. It is not business as much as it is blatant rent seeking. Licences and monopolies are often justified by so-called universal service obligations, but consider cellphone licenses: according the the GSM Association, in 92 countries surveyed $6000m has been collected in "universal access" levies of which only $75m has been spent on actually expanding mobile coverage. This exposes the way governments are using licenses as a de facto tax which - needless to say - is easier to collect from a few large corporations, and for which the general public will slowly but surely pay the full price, collected (leftists would say extracted) from them by the very same corporations. In SA the Universal Service and Access Agency is reported to be on track to achieve its target of 20% fixed-line penetration in 1500 (sic) years' time at its current rate of spending. Only the comatose would refrain from questioning whether this system is working.

To what extent is territorial jurisdiction even relevant when services have become pervasive on the entire Internet? I have used Skype in at least a half a dozen countries to call people all over the world and - I guess - the only tax paid has been Skype's taxes on corporate profits (wherever they realize those profits - I have no idea). The SA government has, in my opinion, as little to say about our use of Skype as they have over the scone you might eat on a flight from Nairobi to Amsterdam. The idea that services are provided in a specific national territory to persons in that territory by organisations based in the same territory is simply a risible anachronism. If they prohibit our use of a specific service (as did in fact use to be the case with Skype and other VOIP) which is of clear business and personal utility, are they acting in the interest of their own citizens? I think not.

So, what should regulators do? First of all, they need to realize that there is no longer much of a relationship between the nature of a service (involving communication of some kind) and the public resources (spectrum, trenches under the road) that it uses. If I have shop in a correctly zoned area of the city, the government does not have much business telling me whether I should sell men's socks or computers. Similarly, if I run a radio/fibre link between houses in a suburb, it is hard for me to see why the government should decide whether I should provide television signals, telephone connections, or both on it.

Some regulation of the radio spectrum usage and the amount of public space occupied by utility cables is - of course - not out of place. But, if I already have a legally run cable (on which I have, say, television) how on earth can it be in the public interest to prohibit me from also providing a telephone service on it? Even more so if I run a thin cable through the pipes belonging to another legal operator, from which I merely rent the - hitherto empty - space. The regulation of services separately (e.g. television and voice communications) belongs to an age when these were delivered by radically different and incompatible means, and when there was a scarcity of both. After almost 100 years of both, it is perhaps time for the state to "get out of the kitchen". The danger of anybody ending up without television or telephone service is slim indeed. There is no reason why broadcasting and telecommunications need more or heavier regulation in a modern economy than does the milk industry!

In the case of Telkom and VOIP/Skype, note that each ADSL client already has a rather modest monthly bandwidth allocation (for which we should thank Telkom) and Skype does not in any case use a lot of bandwidth. Now, Telkom has a license for (and monopoly on) the provision of ADSL connections on its copper wires but NOT a license for specifically providing Internet MINUS Skype. If they are not satisfied with the current license, I believe that they should return it. Telkom may then apply for a new license - this time to provide ADSL Internet MINUS Skype and try to explain to the regulators and the general public why this would be to our (and not their) advantage.

In an open and liberal society any activity which does not directly contradict the established rights of individuals or institutions should not be summarily criminalised. However, this is what an invasive regulatory regime inevitably does. In India this strong-armed approach has always been called the license raj. The South African version can perhaps be called the konsessiekultuur, after the method of the Kruger government to grant so-called concessions for the (monopoly) establishment of specific industries. The elegant Sammy Marks House, just east of Pretoria, is a testimony to that culture. Sammy Marks received concessions i.a. for the sole right to manufacture glass jam jars in the Transvaal republic more that 100 years ago. His descendants (and money) are now in England, of course.

Where some case can be made for imposing regulations on business already operating these should are best inforced through the courts rather than through a license raj. For example, local content rules on radio stations in SA have given a powerful boost to our popular musical culture but the responsibility for enforcement should lie with the regulator - and not by the current system where new entrants to the market have to, as it were, prove themselves innocent before they can start. The regulators can gladly examine all 6500 stations on Live365 and try to determine if any operate from/to SA in a meaningful sense and try to convince a court to prosecute the owners if they do not comply with the regulations. But, can they really stop me from listening to BBC3 using a wireless broadband connection in my car? Nope.

It is perhaps instructive to return to an early example of business regulation. As with so many things in the modern world, this is to be found in the United States. The Interstate Commerce Commission was created in 1887, not to establish railroads but simply to address issues of competition and market dominance with respect to the already extant and vast railroad system of the United States. The US did not "get" a good rail system because of "good" regulation of the industry - it got one because the industry was allowed to developed with hardly any regulation at all.

English summary: the metropolitan council in the Pretoria area have launched a public wireless network in certain parts of the city in conjunction with private service providers. This week I took my laptop to Hatfield in order to test it - and it works! The network's homepage is here. 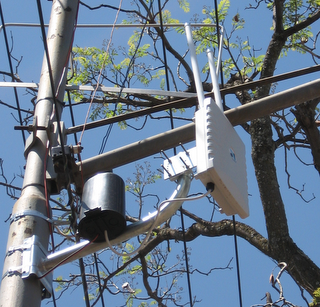 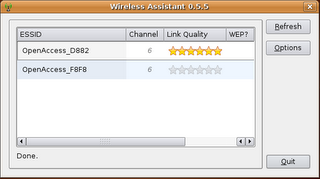 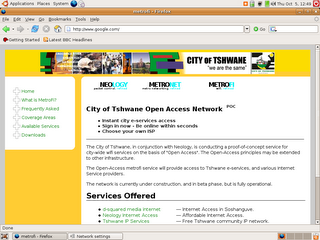