Holiday reading, book 1: The Square and the Tower (Niall Ferguson) 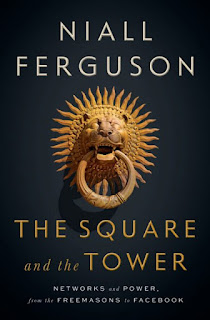 I really enjoyed this book. Nevertheless, compared to the author's other compelling works the pace is quite uneven. Parts of it can easily be skipped, in fact. Where it reviews the theory of networks, for example, I was quite bored and disappointed but possibly because I know the topic somewhat well. It is really very good in the main however and most of the conclusion is excellent.

Ferguson makes the point that our era of technological advance in communication is not perhaps that novel at all.I would differ from the author on three points though, in his conclusion and general approach.

1. I am not nearly as bullish as he is about the progress of AI. It could also easily be that it all ends up, if it even happens, as some kind of intelligence living happily and separately in machines and knowing and caring about us as much as we care about the cockroaches or beings on other planets. Moreover, I do not see a great leap forward between now and 2030 although I would not completely discount the possibility that by that time (or even now) it will only be the computers reading this.

2. Tall buildings as a symbol of power do not strictly belong to the past but are still a symbol of (now) consumption power for the rich of Manhattan, Dubai, Bangkok and (lately) even Johannesburg.

3. The current American president does not strike me as of immense importance in the long run but neither does his predecessor.

The author is an admirer of the political philosophy of Henry Kissinger and here I agree with him almost entirely. He very nicely describes the dangers in the near future that Kissinger had identified and I am afraid that these are very real. Further, I think that the book pays insufficient attention to modern Germany as an economic and cultural power, instead concentrating overly much on the UN Security Council countries. I would not have placed much emphasis on France but one of the nice things about the book is that South Africa features surprisingly frequently. I really enjoyed this and think that the country is an interesting case in the history of the world over the past few hundred years. French readers might have inverse sentiments.
By / Deur Petrus