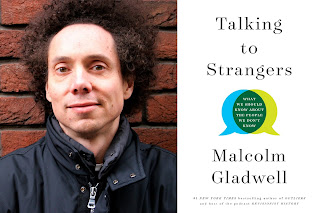 This is the book by Gladwell that I enjoyed the most  – by far. I read it in one day, admittedly mainly during a medium-distance trip by bus from Bangkok to Siem Reap and I would have spent New Year's Eve in the hotel room, had I not finished it in time.

It is not about how to talk to strangers but what happens when strangers communicate (badly) and how that has changed over the years. The parts about the political conflicts of the 20th century are very amusing but what I found most valuable was the way the he explains the problem of excess police violence in the US (and probably other places) in terms of the background of dubious innovations in policing and in terms of tragic individual examples. He has greatly strengthened by conviction that in an era of standardised, tabulated and dashboarded administration (in large corporates as well as by the state) we should pay a lot of attention to the consequences of the small number of cases where things do go wrong, as they inevitably do.