Holiday reading, book 6: HATE – Why We Should Resist it With Free Speech, Not Censorship (Nadine Strossen) 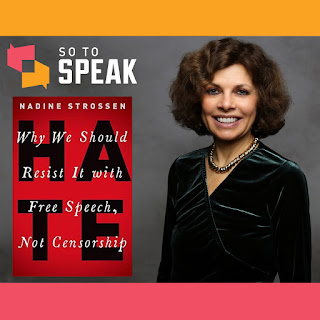 Nadine is a veteran president of the American Civil Liberties Union (ACLU) and thoughtful and principled law professor whom I have had the good fortune to meet on a few occasions i.a. in New York at a reception in their beautiful apartment. Her stance on this topic is relatively well known but I am very pleased that she has written this book in which she brilliantly explains and champions the US view on "hate speech", based on the First Amendment. Over the past half a century, the ACLU has defended the free speech rights of some quite objectionable parties, for which they (and she) have my great respect.

She quotes former President Obama quite a few times and I am relieved to hear that he has such a solid comprehension of at least the First Amendment to the US constitution. Now, the statement that I have just made is an example of the kind of speech that would be absolutely protected in the USA but perhaps not in Singapore, the Soviet Union or either the South Africa of BJ Vorster or that of Nelson Mandela as I might be insulting the gentleman's dignity.

On several occasions the author refers to the abuse of hate speech (by which I assume she includes the abominable notion of crimen iniuria) in both old and new South Africa. She does not discuss this much further but what is interesting for me is that our special courts dealing with these issues now order perpetrators to actually pay compensation to the victims. Of course, the first order for compensation based mainly on the utterance of a specific word by a White person towards a Black one, was made in Ciliza v Minister of Police and Another in 1976 – on the basis of it constituting that very South African offense of crimen iniuria.

Fact is not a defense for crimen iniuria in SA but I learned from the book that several jurisdiction also disallow factuality as a defense in modern "hate speech" cases. In fact, in the Netherlands, there are verboten (I am, again, testing the boundaries) questions. Several other chilling examples from Europe make it into the book as does the somewhat silly (ditto) prosecution of poor Bob Dylan in France on the basis of a complaint by the Council of Croats in France in the same month that he was admitted to the légion d'honneur.

The dark history of "hate speech" restrictions is clearly illustrated in the book and the author points out that in Weimer Germany the prosecution of anti-semitic "hate speech" was in fact quite common. What I did not know is that in the past few years, US campus restrictions on speech have in fact frequently been used against racial minority groups.

In the US, it is clear that if the intention is imminent serious harm then the speech is not protected and furthermore restrictions should satisfy viewpoint neutrality. The book well explains the history of this in jurisprudence and for a lay reader like myself it is very convincing.

I loved the book but I have always been a fan of the US constitution and you have to be a bit legally inclined to make it through the book. It can easily be read in one day and would leave you ample time for other hobbies.

Image borrowed from somewhere – use here presumed to be allowed under SA copyright law.
By / Deur Petrus