Of cryptocurrency and chinchillas

The US Securities and Exchange Commission (SEC) has alleged that the operators of Ripple (a distributed ledger based payment network) has been making an illegal unregistered securities offering through its sale of XRP, a cryptocurrency which is associated with some of Ripple Labs' established payments business. As described by Roslyn Layton on Forbes, the charge poses questions regarding fair process and regulatory overreach. Jurisprudence on securities offerings rely heavily on the case SEC v. Howey Co., 328 U.S. 293 (1946) involving an orange grove development to which I simply refer as Howey.

There are two easy outs from the purview of the SEC: an investment that is mainly for consumption (e.g. a house in a sectional title development in which one intends to live), or a currency – even if there is a clear expectation of profit on the part of the investor. Even the government has to admit that people generally do not buy things in the expectation of making a loss! Extensive litigation around what constitutes a security has taken place and, confusingly, various circuits of the US federal courts have taken slightly different views on this. The three parts of the Howey test on which they agree are that their must be an investment of money, an expectation of profit and that this must be solely through the efforts of a promoter or third party.

The fourth part of the Howey test involves common enterprise which means that there might be pooling of the resources contributed by purchasers of the contract or token being offered and a link between the putative investor's returns and the efforts of the promoter. The link is clear in the case of shares or, as the court determined, possibly chinchillas as in Miller v. Cent. Chinchilla Group, Inc. (8th Cir. 1974) which determined that offering chinchillas for breeding with a guaranteed buy-back of $100 per pair did indeed constitute a securities offering.

It seems clear that the operations of Ripple Labs are funded to a large extent through sales of XRP but on the other hand, XRP has been traded and used as an ordinary cryptocurrency on exchanges for many years. Its fluctuation in value has also been correlated to a significant extent (around 0,3) with that of Bitcoin. To me, this suggests that any expectation of profit from ownership is significantly related to the general view on crypto and definitely not solely to the efforts of Ripple Lab.

It is not at all clear whether the SEC's case against Ripple will fail and, certainly, certain token offerings definitely have the character of a securities offering. However, I can also see the possibility of a Ripple test emerging from this which covers instruments which

It would be a shame if great innovators like Ripple Labs were shackled by the fear of SEC prosecution through an overly zealous interpretation of the Howey test.

WhatsApp support lines and bots only work if your bot or mechanical Turk (human) can respond practically immediately. I have been entangled for about a week with my internet service provider who proudly announced that they no longer use e-mail (it is supposedly very 1990s) for customer support. 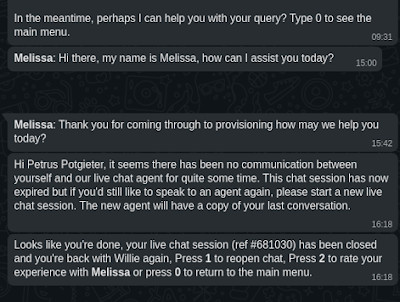 Now, is is great that you no longer have to call a telephonic support line (especially if you are hearing impaired!) but as the image above shows, a human (or named bot) responded yesterday after six hours at which time I was having a haircut and unable to respond to it. It then went away and I am back where I was, suspecting only that Melissa (the virus) has taken an easy job on the WebAfrica support line. 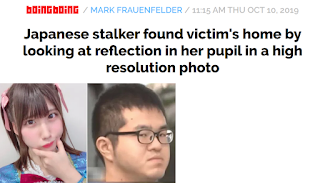 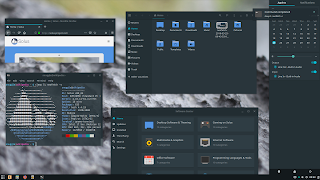 I recently decided to try Solus, a Linux-based operating system with a nice, clean and fast desktop environment called Budgie. It installed easily on an older Dell laptop and the WiFi worked right from the start, which is not always the case on the particular machine.

Support for the Afrikaans language is not too bad and although I have not worked out which package manager it uses, the GUI Software Center is easy enough to use. It did hang on the installation of Sublime text editor though as did TeXworks and there is no obvious way to pause and/or restart the process. Synthing installed without trouble and I used it to copy about 40 GB of personal files from my OSX machine on the local network which was rather painless and fast!

Solus has a very pleasant appearance and I shall probably be using it for a while.
By / Deur Petrus Geen opmerkings nie:

The last of 2019/20 summer holiday reading was a wonderful little book about which I have known for a long time but was prompted to read it by a friend having recently mentioned it recently. The writing is wonderful, the stories whimsical and sad (since everyone knows what is coming in the 1930s) but also sweet and amusing.

The book consists of more-or-less separate stories with interrelated characters and plots. My favourite character is probably Bernhard Landauer, ostensibly based on the real-life Wilfrid Israel. The Landauers in the book own a department store (like the Israels in reality) in Berlin and one of the poignant scenes is where the main character goes to the shop in search of Bernhard just as the SA starts the boycott of Jewish-owned businesses. He describes himself and others entering the huge shop as the men stand outside with the placards, just as in the picture shown here, outside the Israel shop in Berlin. The SA men look faintly ridiculous, almost bored and definitely very boring. And then all of the rest happened.

Delightful details of pre-wat Berlin pepper the book, such as paying tolls on the AVUS motorway to Grunewald. This first motorway, the construction of which was started prior to World War I, was completed by private investors and remained private until 1940. Some of these details are in the German but not the English entry on Wikipedia. One of the innovations of the road was that it horses would not be allowed.

Read this book on holiday or on a rainy Saturday! In case you did not know, Isherwood was a cousin of the other wonderful English writer, Graham Greene.
By / Deur Petrus Geen opmerkings nie:
Ouer plasings Tuis
Teken in op: Plasings (Atom)