Spring drizzle heralded the Software Freedom Day 2006 event on Saturday 2006-09-16 at the impressive new Department of Science and Technology building next to the N1 in Pretoria. The two gentleman below, pictured making legal copies of open-source software using a Freedom Toaster, were among the many Linux enthusiasts who attended. 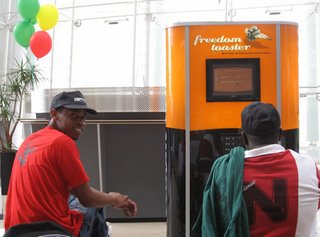 To Russia, with love

On the occasion of last week's visit to our country by President Putin, and several Comrade Ministers' coy reminiscences in the media ("after a while we discovered one or two small flaws") of their exile days in the Soviet Union and barbed references to the dreadful state of post-Soviet Russia, I offer this chart. 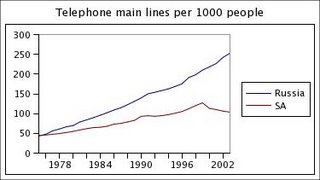 Reuters wrote on Monday from the annual meeting of Mopresidente with advisers from IBM, HP etc. in the Kruger Park. Mr Mbeki reportedly said that "the government had so far failed in its mandate to lower tariffs" in telecommunications and that "the cost element is too high ... It is a matter of urgency."

Spot-on, Sir, but do we need more of the same? Telkom has now managed to actually reduce the number of land-lines in service year-on-year (and before you think it is all because of cellphones, look at China's numbers). His Minister really only talks about initiatives involving state-owned (or partly so) companies. What about radical deregulation, letting in the foreign companies and also unbundling the local loop? Celebrity economist Dawie Roodt said this week that the cost in lost growth of the Telkom monopoly to the SA economy is running at R10 000 000 000,00 per year. That seems like a conservative estimate.

Telecoms is not the only area in which SA is proving a laggard. According to the IFC several countries in Africa are now reforming their economies at a faster pace than SA and our country has dropped one position to 29th in their Doing Business survey, mainly because of the excessive complexity of the tax system.
By / Deur Petrus Geen opmerkings nie:
Nuwer plasings Ouer plasings Tuis
Teken in op: Plasings (Atom)