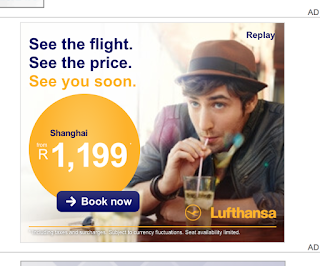 This ad appeared several times on websites I visited (e.g. xe.com) over a period of several days earlier this month. It illustrates a phenomenon which I have also observed on AirBnB and perhaps elsewhere. The website obviously determines two different locations: one for the currency symbol ("R") and another for the actual currency (displaying "1199") so that we see the price for (say) London but with the currency symbol for (say) Johannesburg. The result is a $79 intercontinental return flight.

It could be that this is a bug in a specific script language or that the content management system somehow uses different script languages for the currency symbol and for the currency amount and that these two return different location values. Anyway, I am a bit surprised that this has not been fixed yet... or that Lufthansa (not so surprised) have not updated their website software.
By / Deur Petrus