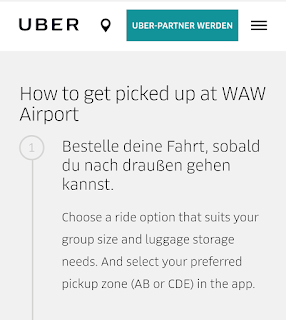 From Wikipedia: "a locale is a set of parameters that defines the user's language, region and any special variant preferences that the user wants to see in their user interface." Basically, German has never been a language that I specified as a preference on any system, so why does Uber give me German headings on the app when I arrive in Warsaw on a flight from Berlin? I do not even recall having a German interface while in Germany (which I would not expect).

It seems likely that the Uber app somehow looks at the default language for your previous location when setting the locale for some of the text of the present one. Possible a typing error in a variable name in the code...

Is is possible that AI will be useful in spotting this kind of unexpected behaviour in software?
By / Deur Petrus